We provide a nice breakfast!

First we explain why email encryption is good for privacy.
Then we will explain the difference between gpg keys vs X509 certificate. We will talk a bit about the web of trust and how it works. The usage of gpg Keys (email encryption, signing emails, file encryption) will also be a part of the workshop. After that we show you the gpg command line tool and some graphical applications to generate and manage the gpg keys. Next we can test the email encryption on your own laptop.

This lecture traces the socio-political background of cybernetics and the development of the computer during the Cold War, illustrated with examples taken from popular cinema of the era. From Norbert Wiener's initial experiments with an anti-aircraft gun in the early 1940s to its assimilation into general systems theory, cybernetics provided the US military with an illusion of control over the fragile equilibrium of international relations.

In this workshop you will build and program your own tiny CNC-bots. You will be provided with a kit with everything you need to build your own device and then will be introduced to ways of programming your Piccolo. This will include the option of a simple drawing interface easy for anyone to use or the option of using the Piccolo Processing and Arduino libraries to create more complex behaviour. After constructing and learning to teach your Piccolo you will be asked to create your own use for Piccolo.

swarming and swarm performances are a long tradition. very often this concept is used to notice the individual behaviour in certain situations, like behavior in public space and the impact of one's personal individual self-perception if there is a set of rules present shaping the swarm behaviour. The most simple one is to swarm in public space with a very simple set of rules, defining the distance between the swarm - members and the individual and collective behavior e.g. if individuals are asked questions concerning their action and so on.

This workshop will hopefully make you anxious. Artists and designers are invited to explore contemporary panics surrounding copyright from a psychological perspective.

Why don't more artists embrace open licenses? And how do we experience copyleft's risky 'opening wide'?

In ordrer to enhance the web of trust, everybody is encouraged to take part in the keysigning party. We sign gpg keys to each other, and whoever wants to be assured by CACert, will find many CACert assurers. It is essential to carry two valid photo IDs with you, if you would like to be assured by CACert assurers. In order to get your gpg keys signed, you need to create them before the keysigning party.

Pam and Peda are cooking for us. Food is free! If you want to donate some money this will support the project http://mulonga.linz.funkfeuer.at/

Read more about the project!

Andi Strauss supports us with his latest Artwork [img_assist|nid=1639|title=|desc=|link=none|align=none|width=400|height=300] Andi Strauss a local artist with great projects like http://www.dasparkhotel.net/ 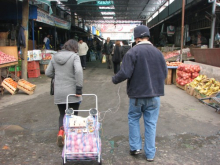 Broadcast Project developed by the Chimbalab Laboratory is a work installed at the intersection of art and technology, which reflects on the low existing technologies and on the verge of obsolescence they remain efficient and alternative systems compared to large monopolies of telecommunications and energy supply.

The first prototype of Broadcast Project began walking in the supply market of the Central Market in July 2010. The second draft, worked at the Biarritz fair in Montevideo, Uruguay, in November 2011.