From frantic shopping malls to coffe shops, an internet cafe or the railway station, while walking and talking about public domains we'll be installing 'A Public Domain' in existing wifi networks in semi-public spaces around the city of Linz.

'A Public Domain' is a series of public installations and interventions within wireless networks. The project parasites an existing network structure and alters the browsing experience by filtering content accessed via the network, excluding words which are not in the public domain. In this way business strategies of control and ownership are repurposed by turning the notion of the public domain into multiple inverted sites of risk and loss of control. Instead of being idealized or critizised as something unattainable, the public domain is here explored as something which is by default fragmented and compromised - 'A Public Domain' literary becomes a public domain, but what is left are fragments and amputated information.

The workshop takes place as a series of interventions in existing wifi-structures around the city. After a short introduction/discussion of the project and testing of the network set-up, we'll hit the streets of Linz and implement A Public Domain into the wireless parts of the urban fabric.

+ 14:30 - preparing the walk /// inside | ethernet connection
Identifying spaces in Linz in which to install the network.
Testing install and set up of APD from participants own computers.

+ 14:45 Hitting the streets of Linz! ///
Walking and talking about public domains while installing 'A Public Domain' in existing networks.

Participants should bring:
+ Computer with wifi network card.
NB: The set-up requires two wifi-network cards, where one should be able to run in 'master mode' under Linux. However, if participants don't have two cards, no worries as we'll have a few extra usb wifi-dongles to share among us. 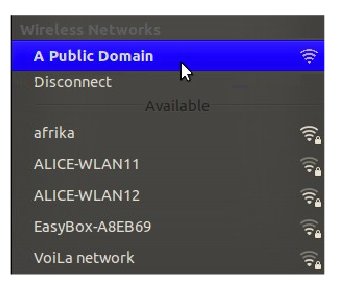