After the arrival of internet and piracy, the impending crisis that encompasses most of society, and the enormous mercantilization suffering, the commercial cinema is devoid of artistic possibilities.

That inspìred me to develop and design a new form of audiovisual expression, taking it back to where it began: the street theater, giving life to the quiet and dead urban architecture.

The idea of film tied to a locked space and a closed and traditional story, becomes outdated in the 21st century, as well as the traditional flat screen that limits the possibilities of the content and makes the whole story seem obsolete when making a more experimental and avantgarde movie. The script is divided into different structures which are taking form on the urban facade, the different barriers that light crosses complete and power up the story, giving it a new meaning. This gives me more freedom in the narration and becomes different for each location, surprising the viewer at every moment with new light surfaces that are reflected in the urban context.

With the premise of portability and different locations going beyond the traditional screens, the aim is to create a new discourse in special environments of urban landscapes like parks, abandoned places and facades, bringing the stories to the citizen. The sound waves are emitted on FM live, on empty bands,frequencies that can be easily captured by the listener with a normal transistor radio or mobile phone without disturbing the rest of the population. The sound is individualized for each member of the public, some little radios are located in the performance area for a better sound spatialization.

This device is now in its third phase of development and has been used for several activism and hacktivism actions in the streets like fighting against copyright, fascism or promoting free software, creative commons, hacker communities and used in the sourroundings of audiovisual festivals like Live Performers Meeting 09 Rome, Mucho Mas Mayo 09 Cartagena, or in creative spaces like La Laboral Gijon, Dialogos en Vivo Rabat, G16 Leipzig, Sommercamp Berlin, etc... 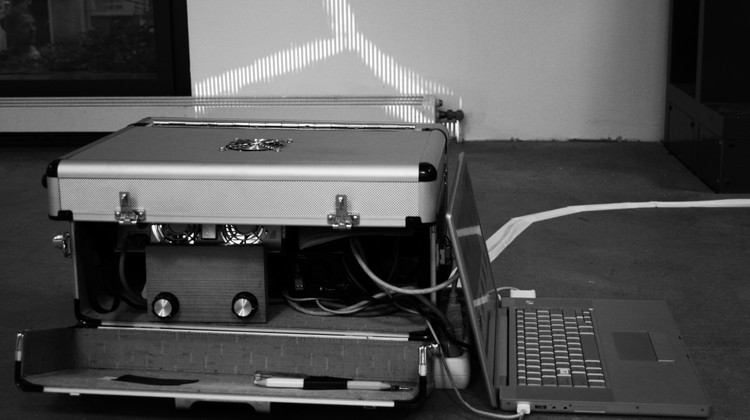